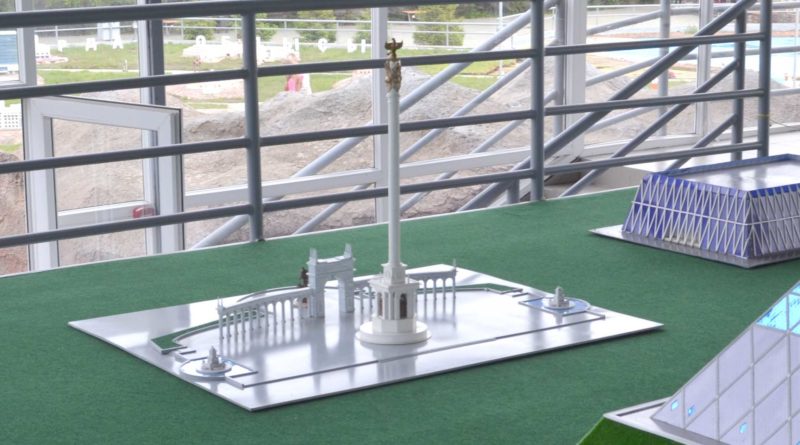 Ethno-memorial complex under the open sky “Atameken” strikes with its beauty and variety of makets presented on its territory. Every year before its opening, visitors are given the opportunity to see and hear from the guides the history and chronology of the development of a particular building erected on the boundless steppes of Kazakhstan. A lot of mysteries and legends left behind majestic structures and cultural monuments. A lot of documentary chronicles have been shot and books have been published about all these cultural attractions of Kazakhstan and books have been published, you can go and see it yourself. However, if you want to briefly get acquainted with the cultural past and present of Kazakhstan, then welcome to Atameken. You will always be welcome here!

One of business cards of the ethno-memorial complex “Atameken” is the majestic maket and grandiose construction from the historical point of view – “Kazakh eli”.

During sovereignty acquisition there was no such monumental object yet. This unique architectural construction, analogs it in the world doesn’t exist. The total area of a monument 5,2 hectares, and it holds a specific place in the history of the people. “Kazakh eli” – the large-scale complex, reflecting ancient history, culture and achievements of the Kazakh people.

The height of the monument is 91 meters. Symbolized the year, when Kazakhstan became an independent state. On top sits a bird Samruk, which demonstrates the aspiration of Kazakhstan to further development and prosperity. Therefore, the purpose of this architectural and sculptural complex is called “Kazakh Eli”. It is a symbol of independence.

Complex, with great compositional content, has absorbed the past and present of the Kazakh people, made of white marble. The monument is not just a symbol of Independence, it is a sign of unity, cohesion and eternity of the folk spirit. Thus, the pedestal with four sides decorated with low reliefs, telling the story of the people. The first low relief – “President and the people.” The Central image is the figure of President Nursultan Nazarbayev, who, with his hand on the Constitution, takes the oath, which symbolizes the rule of law in an independent state. For the President, people embodying the inhabitants of a friendly big country have been placed in relief. Doves symbolize freedom and peace.

The low relief located in the southern part of a monument is called “Courage”. It is made proceeding from the fact that, protection of the state is one of the main and sacred values of the Kazakh people. The low relief reflects a chronological foreshortening of military valor, heroism and courage, inherent in the kazakhstan people. The low relief located in the western part of a monument is called “Creation”. She narrates about epoch-making stages of development and prosperity of the people since a nomadic way of life before flights in space. In this part you will see metallurgist and oil industry worker, engineer and grain-grower, builder and astronaut who have made an invaluable contribution to social and economic development of the country. In east part located low relief is called “Future”. He is devoted to the youth of Kazakhstan, seeking for achievement of heights in science, culture and sport. It is significant, that in the center of composition are located newlyweds that testifies about eminence of family values, calls for strengthening of the institution of the family and marriage – bases of the Kazakhstan society.