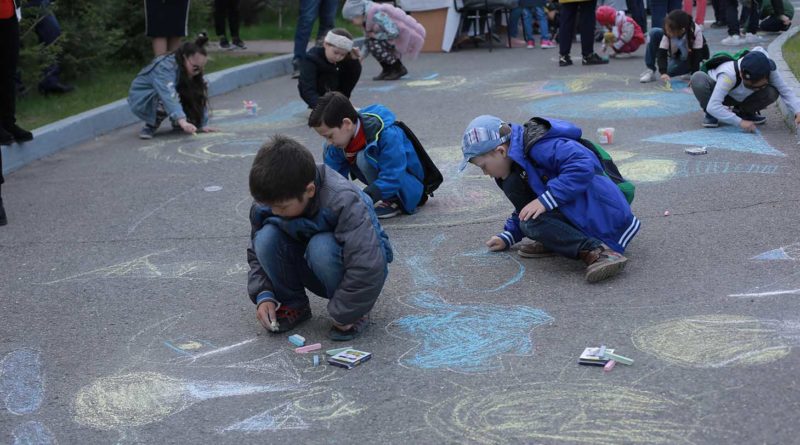 Open house day – “Tarikhy shezhireli atameken”, dedicated to the 20th anniversary of Astana and International Museum Day was organized on the 18th of May on the territory of the ethno-memorial complex Map of Kazakhstan “Atameken” within the framework of the program of Nursultan Nazarbayev “Course towards the future: modernization of Kazakhstan’s identity”. Visitors were given free excursion. The open house day took place from 10 a.m. to 1 a.m. Within the celebration, traditional products, sweets, cotton candy and ice cream fair was held in order to attract the visitors. A competition “Beautiful drawing on asphalt” dedicated to the 20th anniversary of Astana and development of children creativity was organized among primary school children and children from Orphanage. The participants of the competition drew their pictures on the topics: “Astana 20 years”, “Motherland”, “Atameken”. In the end of the competition the winners were awarded, all children visited the map for free and received presents. Moreover, 18 winners of the “Best guide 2018” competition were awarded with certificates which enabled them to work in the complex on a fee basis during the summer season. “Nur Alem” band from school №50 “Kazgarysh” after Rayimbek batyr, dance group from school-lyceum №56 and folk ensemble and artists from “Kazakhconcert” participated in the holiday concert. Active participants of the event were given presents and thank you letters. In the end of the event a lottery among visitors and the museum personnel has taken place. Winning tickets received valuable prizes.