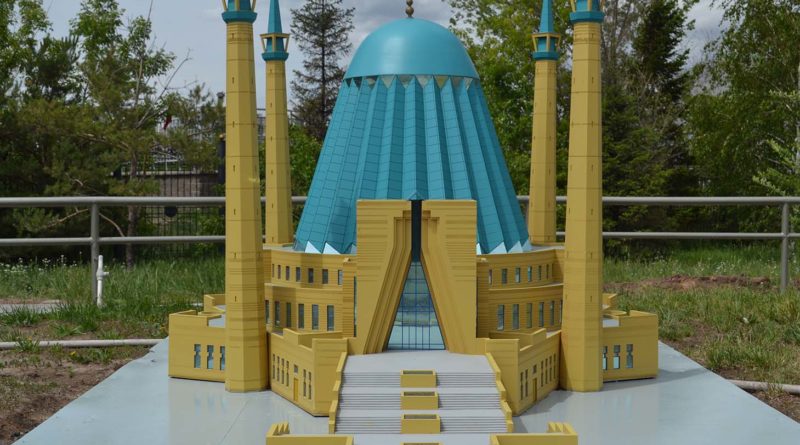 One of the main attractions of the ethno-memorial complex “Atameken” is the Mosque of Mashkhur Zhusup. Construction of the mosque began in 2000 and lasted about two years. The magnificent mosque opened doors to prayers in 2001. The mosque was named in honor of the highly educated and deeply religious man, a famous scientist orientalist Mashhur Zhusup Kopeev.

The main mosque of Pavlodar is seen from across of the city. Sky-blue dome is as shanyrak crowned by golden crescent, and the upward aspiration blue minarets and majestic staircase can command respect and admiration from all residents and visitors of the city. Despite the fact that the mosque was built relatively recently, this magnificent building is added to the list of the main attractions of Pavlodar.

Mashkhur Zhusup Kopeev (1858-1931), also known as Mashhur-Zhusup Kopeyuly – the Kazakh poet, philosopher, historian, ethnographer and collector of oriental folklore of the Kazakh people. He studied at village school. He studied at Bukhara madrassa of Khazret Camar in 1870. After studying, he went to Northern and Central Kazakhstan regions and collected works of folklore. During his traveling, he visited many famous places in Kazakhstan: Karaotkel, Atbasar, Kyzylzhar, and acquainted with life and folklore of tribes, who lived in these lands. Even at that time, he showed himself as a thoughtful and observant poet, who could accurately describe and convey events and phenomena of the life.

In honor of this writer, scholar and a worthy son of the Kazakh people, the main mosque of Pavlodar was named after him.

Architectural settlement of the mosque of Mashhur Zhusup amazes with beauty and grandeur, and it is a jewel of Pavlodar. It was joined to the list of attractions all over Kazakhstan.