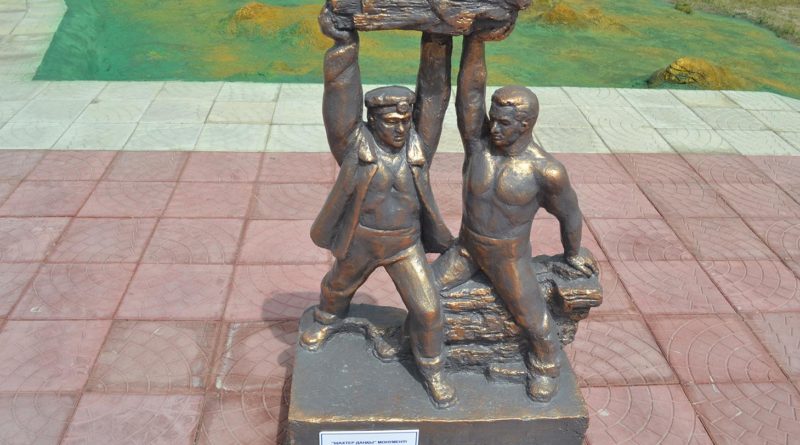 “Miner’s Glory” Monument is a kind of symbol of Karaganda, after which came the title coal capital of Kazakhstan. This monument was erected in 1974, in honor of 2 million tons of coal production in Karaganda. The “Miner’s Glory” monument finally took place on the square in Karaganda only in 1974, since that time it has become the unofficial symbol of the city. The image of the monument was often printed in the headlines, cards and envelopes.

Bronze figures of miners eventually covered with metal noble patina. The pedestal was made of concrete and lined with polished granite blocks. The monument is located in front of the main entrance to the Central Park of Culture and Recreation, on the contrary is the Place of Culture of the miners. Space was specially chosen for installation of the monument.

The particular project had been taken as the basis and implemented with some minor adaptations. A.Bilyk worked on the sculpture during the whole year in the studio of famous sculptor Merkulov in Moscow. Then, a few years left on the various negotiation, preparation, casting and installation of the monument. Two miners on the monument – a collective image – nobody posed to master. However, he did not go down into the mines, but he was aware of miners’ hard work. Later the master recalled himself; the idea of the monument was born after impressions to artist’s work about mining.

Bilyk communicated with miners at 31 mine, and made drafts. When he was down into the lava, says, “Seemed that the whole earth falls to me”. The timber-men’ work impressed him. They do everything in order not to make the roof fell on their head. Anyway, miners etched in his memory how they keep a single layer over themselves. This is a strong upward movement, which symbolically expressed in sculpture.

The sculptural memorial “Miner’s Glory” is a hymn of labor glory to miners, metallurgists, builders of Karaganda, Temirtau in honor of their selfless and heroic labor.