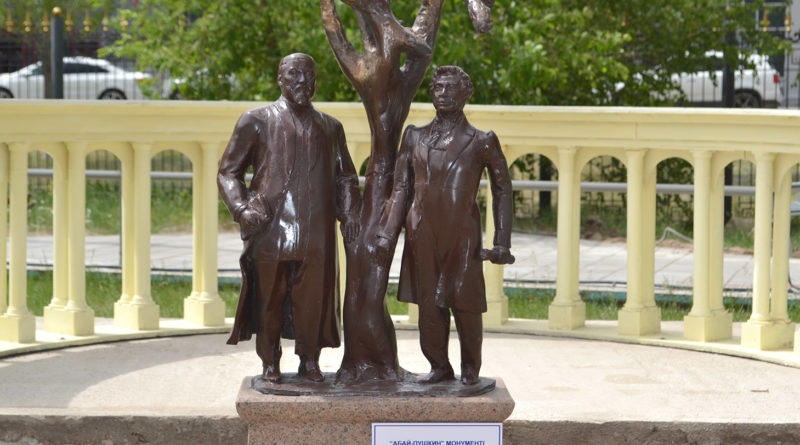 Monument to Abai and Pushkin – one of the finest samples of a modern sculpture. He symbolizes century friendship of the Russian and Kazakh people. The monument is established on December 16, 2006, in honor of end of Year of Abai in Russia and Years of Pushkin in Kazakhstan in the center of Petropavlovsk in the North Kazakhstan area.

The composition of the sculpture consists of two figures – Abai and Pushkin, connected by a symbolic tree of life. It sort of divides the epochs of the creations of these personalities, and at the same time unites them as a symbol of eternity. The figures were cast from bronze at one of the factories in Almaty and installed on a powerful granite pedestal. The height of the monument is 7 meters 40 centimeters, the height of the pedestal is 2.2 meters. The monument is surrounded by a slender colonnade with a diameter of 50 meters.

Abai and Pushkin lived and worked in different epochs, but there is much in common between them. Both were truly folk poets. Both were humanists and dreamed of enlightenment. Poets were related to the spirit, and it is for this reason that Abai so loved and respected Pushkin’s work. He translated into Kazakh a lot of his works, bringing the word of the Great Russian genius to yurts in the most remote areas. From mouth to mouth works were transmitted; “The Letter of Tatiana”, “The Word of Onegin”, “From Lensky’s Monologue”. Abai managed to bridge the gap between the cultures of the two peoples.

It was 2006 that was declared the Year of Abai in Russia and the Year of Pushkin in Kazakhstan. In both countries the interest in the work of the classics was revived. A monument to the great son of the Kazakh people – Abai Kunanbayev, was opened in Moscow. As a response gesture in Petropavlovsk, it was decided to install a sculptural composition “Abai-Pushkin”. The composition “Abai – Pushkin” is installed in the park zone of Petropavlovsk, which is considered one of the best corners of the regional center. Opened on the Independence Day of the Republic, the sculptural ensemble became a good gift to the city and country, as well as a worthy end to the Year of Abai and Pushkin and the continuation of the traditionally strengthened traditions of good neighborliness between the peoples of the two countries.