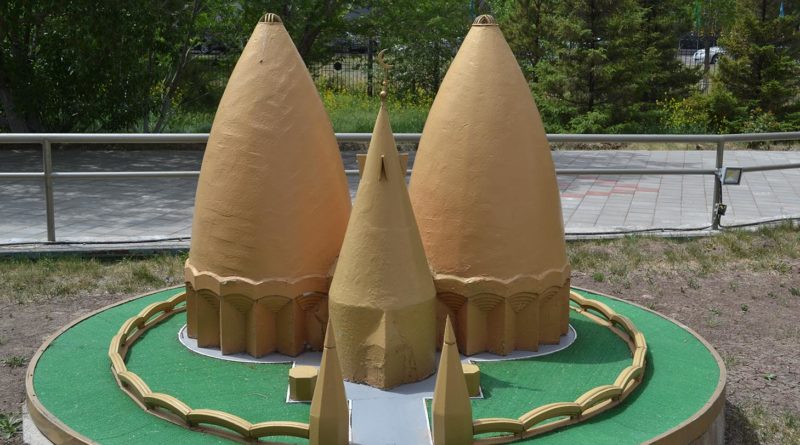 The ashes of the great Kazakh warriors Karasay and Agyntay are on the high hill near the Madeniet village, Aiyrtau district, the North Kazakhstan region.

In the 17th century, famous batyrs Karasay (from shaprashty tribe) and Agyntay (from Argyn tribe) defended this land from foreign invaders under the management of Esim Khan. In the hard struggle against to dzhungarian invaders, the troops of Esim Khan was commanded by eighteen ages old batyr Karasay, and Argyn-Agyntay was his assistant and best friend. Inseparable batyrs participated more than 200 times in the bloody battles against invaders during 48 consecutive years. Both batyrs were buried on the Kulshynbay – Tobe hill.

Compositionally the complex develops the traditions of ancient Turkic rates of khagans. The main axis is oriented towards Mecca, where directed the protrusion of the mosque mihrab. Entrance directs to the circle, which is fenced with brick walls and highlighted by two towers. It leads to the area in front of mausoleums, which was intended for prayer and sacrifice. In the corners are set crossed spears of metal profile with bronze plates – as symbols of military valor of brave. Two mausoleums of the great warriors are in the center of the circle. They are made in the characteristic of the Northern Kazakhstan ellipsoidal shapes.

Memorial complex of Karasay and Agyntay batyrs becomes a place of pilgrimage and excursions from the first day of opening. Thousands of people from all Kazakhstan and foreign guests visit it every year. The President Nursultan Nazarbayev was twice there. The mausoleum has hotel for pilgrims and tourists. According to the established tradition, newlyweds come to the mausoleum, and hence escort the army, studying.