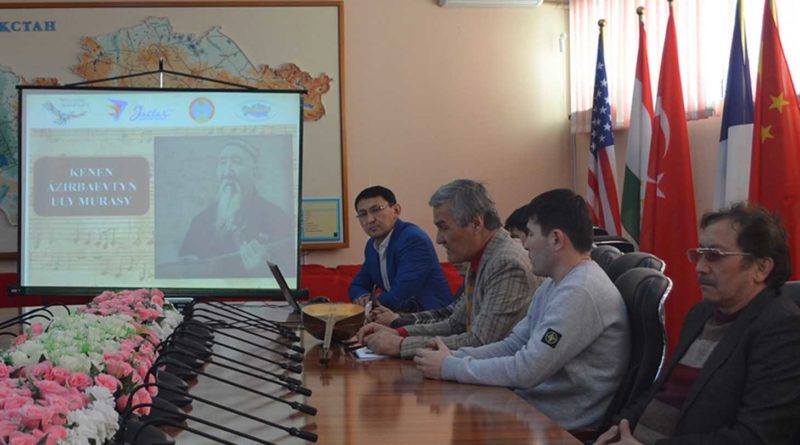 An evening on the theme “The great heritage of Kenen Azirbayev” dedicated to the memory of the outstanding kazakh poet-composer Kenen Azirbayev was held in the ethno-memorial complex “Map of Kazakhstan “Atameken” as part of the program “Ruhani Zhangyru”.

Despite the the society is updating and the time is changing, the history does not change at all. Kenen Azirbayev was an honorary citizen of the country, Honored Artist of the Kazakh SSR, a member of the Writers Union of the USSR and the Union of Composers of the USSR, and also the owner of the orders “Lenin”, “Red Banner of Labor”. He also repeatedly awarded the “Certificate of Honor” of the Supreme Soviet of the Kazakh SSR. Obviously, the natural gift of Kenen Azirbayev as a poet, singer, narrator, and many of his other talents were used by many scientists and art historians in their scientific works.

“Kenen Azirbaev is a gifted, talented author who is a student and also a successor to Zhambyl, who published more than 150 works. Our main goal is the preservation in the Kazakh art of his skill in aytys and works to this day. I am glad that nowdays people remember honoring the memory of Kenen’s legacy. This suggests that Kenen’s legacy will never be forgotten and will be further explored in the future” – said Honored Artist of the Republic of Kazakhstan Serik Karibaiuly.

In addition, during the meeting there were stories about the work of the individual and the poet’s songs were performed.

Obviously, thanks to such important events, the heritage of Kenen Azirbayev introduced into the Kazakh spirituality, will forever remain in our history.